Writer Brad Meltzer is an interesting case in the comic book industry. Mostly known as the author of several best-selling thriller novels, he had a stint in the mid-2000s writing comics for DC and while most of his output is overshadowed by the controversial Identity Crisis miniseries (a story that is going to be addressed in another opportunity), we shouldn’t forget some of his best work in the industry, such as the Justice League’s The Tornado’s Path storyline or what we have today, Green Arrow’s The Archer’s Quest.

One of the most interesting Green Arrow storylines that you are going to find in Oliver Queen’s extensive catalog and a celebration of what the character has accomplished in years and years in continuity. Definitely one of the most underrated storylines that DC has published this century when it comes to the Emerald Archer.

What is The Archer’s Quest? 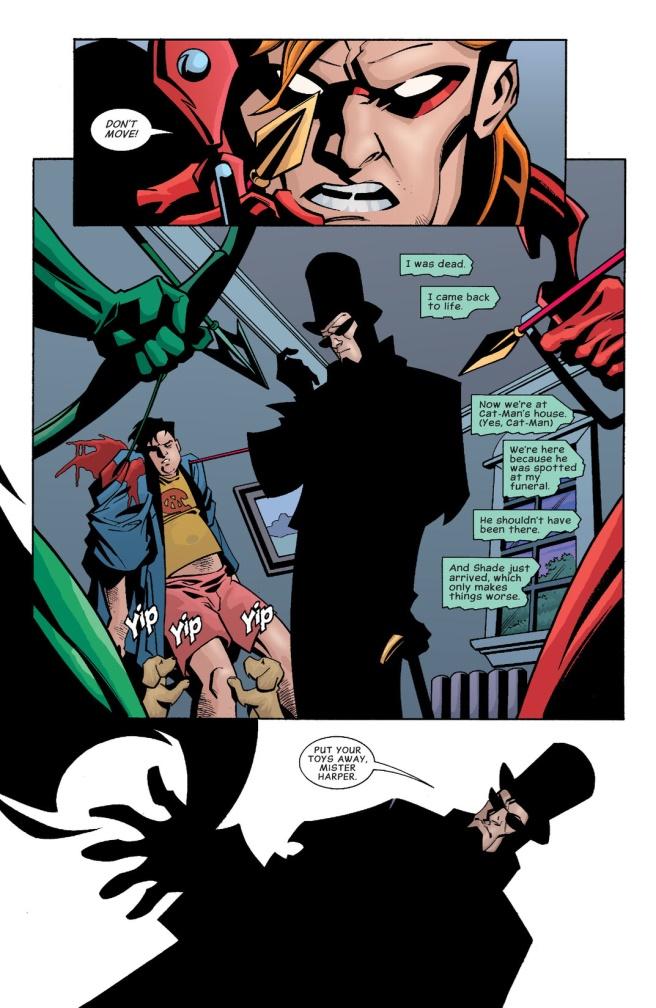 Oliver Queen died and came back to life, but there was some unfinished business to resolve.

Because of Barry Allen’s death in the Crisis on Infinite Earth's events and Hal Jordan’s fall into villainy by becoming Parallax, Oliver decided to hire someone to destroy all the different artifacts that may give away his secret identity as Green Arrow after his own death. But it turns out that someone he didn’t know was at his funeral and has to track him down and also recover his belongings that were not destroyed, accompanied by his former sidekick, Roy Harper, also known as Arsenal or Speedy.

I’m giving a very simple summary because I don’t want to spoil the story for you. 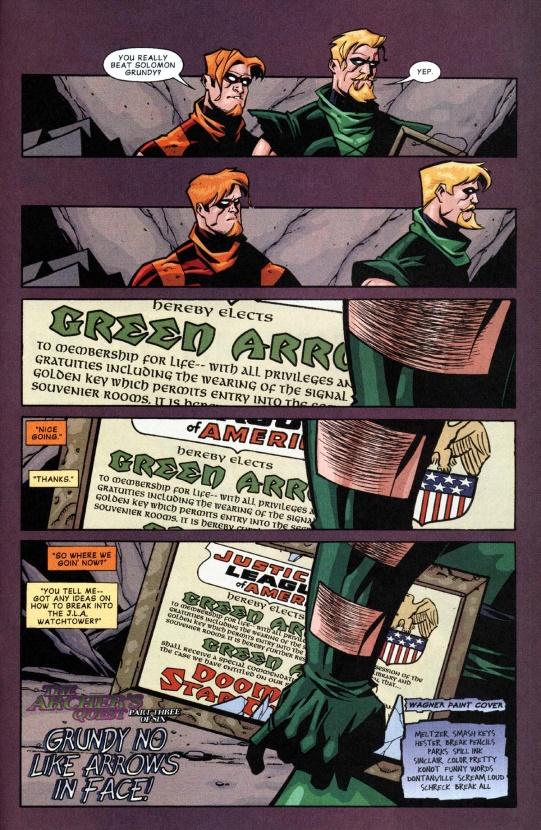 I have soft spot for Brad Meltzer as a comic book writer (I haven’t checked his novels yet) because of various reasons, but one of my favorites is the fact that he relies a lot on continuity. I think that is something that a lot of modern comic book writers fail at: they simply reject continuity or ignore years of canon only to force their own take of the character instead of building up with what they have.

Meltzer works the other way around: The Archer’s Quest is based on the many different adventures that Green Arrow has had throughout the years in the comics and managed to make them all cohesive, coherent and it makes the story flow with a more natural feel. He doesn’t ignore Oliver’s time as a vigilante in Seattle during Mike Grell’s run (even though he gives me the feeling he wasn’t a fan of that period of the character’s life), he seizes new elements like his son Connor or Roy Harper’s character development throughout the years and also uses decades of lore, like the Hard Travelin’ Heroes storyline with Green Lantern Hal Jordan in the 70s, his time as a Batman ripoff in the 60s and a lot more.

This comic book storyline is a celebration of the character’s history and manages to be both hopeful and introspective without being overly dark. Meltzer puts Oliver through some hard ordeals while still maintaining his heroic features and heart-on-the-sleeve kind of personality. In fact, I would go as far as saying that this is the best portrayal of Green Arrow’s character, leaving aside Grell’s iconic run (but that is a subject for another review).

Casual fans of the Green Arrow, may not know our hero has gone by many names of the years. One of which is the Emerald Archer. The Emerald Archer Illustration T-shirt is a great Arrow T-shirt to show your love...read more

The dialogue is very strong, as well. Having read this comic in 2020, 18 years after its publication, I can say it doesn’t feel dated or uncomfortable to read, which is something that I recommend to any writer is: always try to keep the dialogue as timeless as possible because, in return, it will make your work more timeless.

Of course, Meltzer is a huge Green Arrow fan, so he manages to add a lot of different references and connections to the past that feels both natural and heartfelt. Bringing back a character from the dead is always going to be a very challenging task and removing everything that happened during his or her absence is often viewed as the best choice when in reality It's the easiest one. Instead, Meltzer allows that space to be used on Ollie’s character to comprehend how he is getting older and how he needs to start thinking about what he wants to do with his life, now as a senior superhero.

Another strong point is how well he understands the relationship between Oliver and Roy, with the former understanding that the latter is now a full-grown man and Roy accepting Oliver’s shortcomings as a father figure and bonding once again on the road. They definitely had a very complicated relationship throughout the years and this comic shows how far they got until that point in DC’s canon.

Perhaps my only gripe with this comic is the portrayal of Green Lantern Kyle Rayner. Mind you, Kyle is my favorite comic book character, so I think Meltzer didn’t get him fully right as he is shown way too concerned with being like his predecessor, Hal Jordan when the reality is that there was no expectation of him being that way.

Having said, it’s a minor complaint compared with what is a very well-crafted and enjoyable comic book. 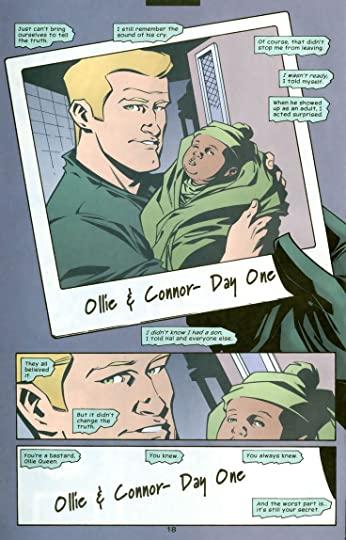 Phil Hester’s art style can be somewhat divisive because there are people with multiple preferences, but in my case, I enjoy it a great deal. It has a very cartoonish feel, but with enough detail to keep interesting and it flows quite well on each panel.

He also has a nice grasp of how to capture great moments on the page, which is something that feels quite right in a comic that is not that action-driven (although there is one big fight that ranks very high on my comic book list) and relies more on the storytelling.

I think Hester is a very talented storyteller as an artist and the way he draws these characters is very good as he adds his own style but still maintains what makes them be who they are. It’s something very hard to do and that goes to show how capable Hester is. Definitely one of my favorite Green Arrow artists of all time. 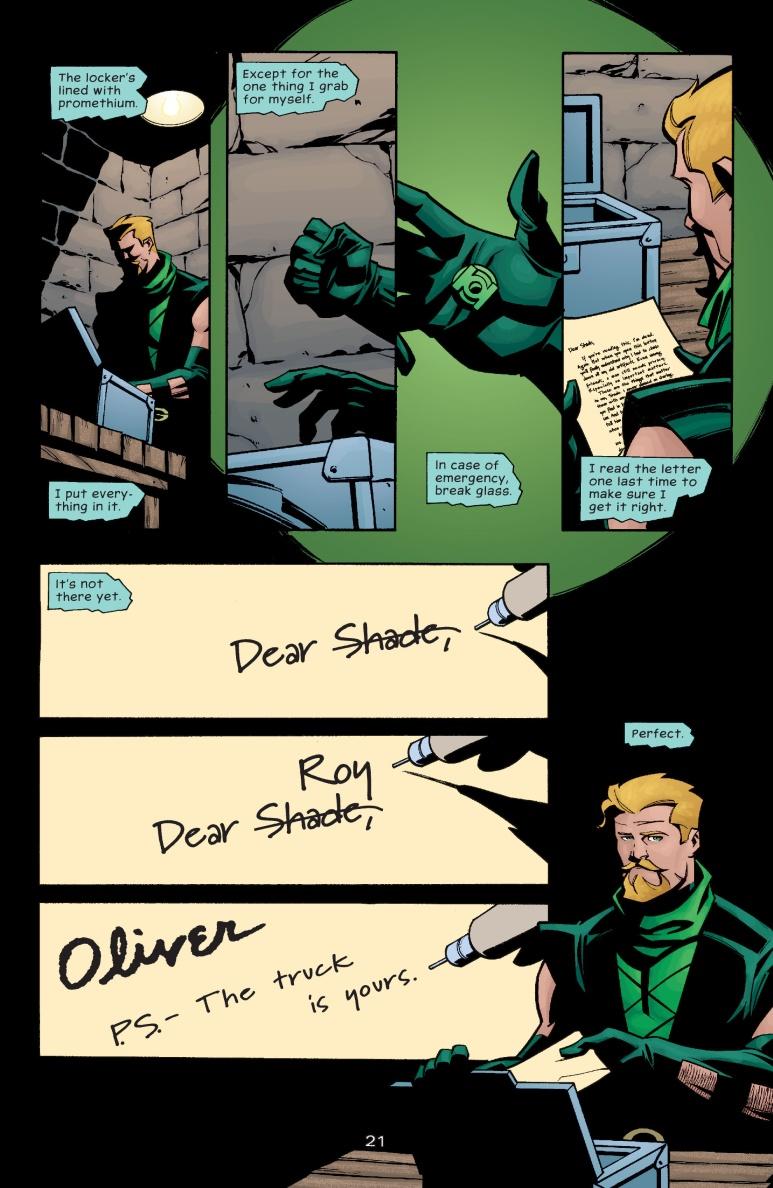 The Archer’s Quest is a reminder of how great Green Arrow can be done right and how using continuity as a source of inspiration can lead to some very interesting stories. That’s why I like this period of DC’s history so much: they were relying a lot more on continuity and it was a great way to showcase how the characters evolved throughout the years and how others came and became part of the family.

Brad Meltzer makes Oliver Queen grow beyond his idea of eternal youth and deal with his own mortality, coming to terms with a world that moved on during his passing and understanding the value of the second chance he was given.

And that makes one hell of a story.