Black Lagoon review: the best “shooting anime” that I have ever seen Gun-shooting stories are a personal favorite of mine, but sometimes I think people can get stuck in a certain formula and fail to go beyond what has been established in the medium. One day I decided to watch an anime series that a friend told me about that was outside my comfort zone, and I was very surprised by the result. It was called Black Lagoon and I found myself a diamond in the rough; both in anime and manga.

Published in 2006 and with hard epochs, the mangaka Rei Hiroe has managed to place his manga above many others of its genre; establishing a guideline that all producers have tried to achieve regardless of the cost. Taken to our screens by well-known production company Madhouse, Black Lagoon is very similar to the classic television series, in which self-conclusive missions and circumstances emerge after a few chapters and it doesn’t cling to a timeline or overall plot.

This makes each chapter very interesting as they do not fall into the same cycle of other animes in which we look forward to a definitive ending. Black Lagoon is entertaining, and the best thing about it is that it’s full of realistic scenarios. You will be able to see truths about the side that we cannot see of society, the challenges that each of the characters face and the motivations for how they live their lives. There is no doubt that its 24 anime chapters and 6 manga volumes will leave you shocked and with a changed perspective on human actions.

What is Black Lagoon? 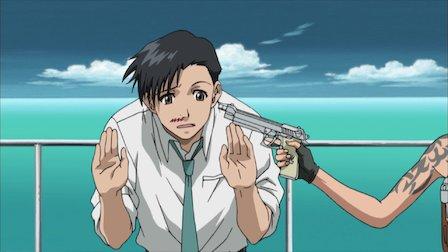 The story begins with Okajima Rokuro, a common Japanese office worker who works a normal job at a transnational market research company. One day, he is ordered to transport a disc with classified information, and while on board a ferry, a mercenary ship attacks, and the crew kidnap him. Despite the danger he is in, his bosses do nothing to attempt to rescue him because the only thing that matters to them is the data disc.

Rokuro realizes how little value he has as a person within his society, and after proving his worth to the Lagoon company (the mercenaries who captured him), they invite him to become part of their organization which is made up of Dutch, the senior boss; Benny, tech operator, and Revy, holster and blood lover.

The protagonist decides to join and with this picturesque group, Okajima Rokuro transforms into Rock and begins an adventure through the dark world of the mafia. We see him struggle between maintaining his principles and falling before the cruelty of his day by day life. The best way to describe Black Lagoon would be “unique”. It’s an anime that in the style of the first decade of the 2000s narrates all its events in a crude way and without softening any aspect. You won’t find absurd scenes in the story and each of the actions of the characters is justified by the overwhelming personality of each one.

There is a great difference between the first season of the series and the next, "The Second Barrage", but they are details without importance regarding ecchi and humor, which doesn’t affect the enjoyment of the series.

As the plot progresses, you will learn the secrets of those organizations that, although we know of their existence, we could never know in depth (unless you were part of them and believe me, you would not come out alive to tell it).

Cruelty is the key factor in the Black Lagoon world. They show the truth as it is and sometimes, it can be painful and make us ask "why do these things happen?" The first chapters are entertaining, but as the plot progresses and you connect with the fate of the characters. You begin to realize that it’s not a series focused on entertainment, but on confronting the mentality we have surrounding other human beings, who are dedicated to doing what we consider wrong to survive one more day.

It’s not difficult to get along with all of the characters in this story and there is no bad or good within. There are only people with an iron will, who want to preserve their lives for as long as possible and who settle for dying, accepting death as an old friend. I thought that in Black Lagoon I would find a shooting series in the style of the movies we are used to, but that wasn’t the case. Watching the anime reminded me of every injustice in this world, for which you and I can do very little about. There is no denying that it’s a fun story for those who only see the superficial. But by delving into each of the themes that the series touches, you will be able to know about those lives that no one ever talks about; those who are oppressed by the system and forced to suffer with no other alternative than living like they are dead, or dying.

I will never stop recommending Black Lagoon to others. Not only does the plot enthrall you, but the incredible animation that was dedicated to the series showcasing sober and mature strokes is some of the best in the anime industry. The scripts are impressive and leave nothing to be expected. And finally, the soundtrack, which leaves you thinking “Wow, it's incredible”, from start to finish, something that you won't find in any other series.

The only negative point of Black Lagoon is the dubbing. Due to being set in an international war city, all the characters are of different nationalities. Although Japanese is used as the primary language (because it’s a Japanese anime, obviously), many times the producer inserts characters that speak other languages. The problem is that the voice actors are native Japanese and therefore don’t pronounce the languages that they act such as English, Spanish, Russian or Bulgarian correctly. This is a little annoying, because in these cases, it’s usually better to leave all the dubbing in one language, so as not to increase the budgets with contracts for international actors. And while this is just the third shooting genre anime that I've watched, I doubt I will find one that I like more than Black Lagoon. It’s full of details that make you connect with the author's message instantly and make you wonder if with the life you lead you could lighten someone's pain a little or prevent someone from getting lost.

Are you ready to see beyond appearances? With Black Lagoon you will have your answer!